The 18th Asian Games which was co-hosted by Jakarta and Palembang, Indonesia being held from 18 August to 2 September 2018. This is the second time Indonesia host this event.

In this quadrennial competition, Malaysia was represented by 447 athletes and 140 officials to participate in 35 of 42 sports.

The contingent of Malaysia arrived in Indonesia with a target of winning at least seven gold medals.

On 1 September, the team of Malaysia finally met the target of 7 gold medals with the unexpected gold medal came from the men’s squash team which comprised of Mohd Nafiizwan Adnan, Ivan Yuen and Ng Eain Yow by defeating Hong Kong with a score line of 2-1. This is the first time, the men’s squash team obtained the gold medal despite the fact their players of the opponent team are ranked among the top 25 in the world. 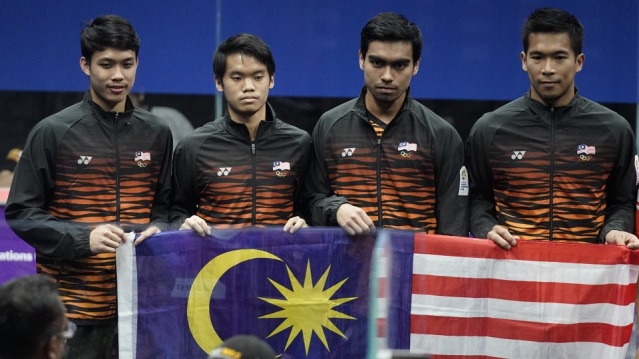 Much hope also expected from the men’s hockey team to be played later at that night to surpass the target of seven gold medal when they defeated the previous edition gold medalist, India in the semi-finals. In fact, in the final, the Speedy Tigers was leading 5-2 till the 4th quarter of the games, but the remaining 8 minutes before stoppage time, the “Samurai’ fought back at 6-6 and eventually won the penalty shootout of 3-1. In the end, Malaysia only managed to nail the silver medal and slip a chance to book an automatic berth in the 2020 Tokyo Olympics. Though it is very painful to see the team which was about to win their first ever gold in the Asian Games, but it is close yet so far to nail that elusive gold medal. Hopefully, thie team will rise up after this defeat and learn from this failure. The chances to qualify to the 2020 Tokyo Olympics is still perform if they perform better in the coming World Championship later this year. At the point of this writing, the Malaysian Hockey Confederation (MHC) led by the president, Datuk Seri Subahan Kamal will appeal to the International Hockey Federation (FIH) requesting for the men’s team to get Asia’s automatic slot to the 2020 Tokyo Olympics after Japan have qualified on merit as hosts (https://www.nst.com.my/sports/others/2018/09/407885/mhc-appeal-olympic-slot). For the record, the men’s hockey team have never won a gold medal since its inception in the Asian Games in 1958. This result repeated the silver medal performance in Guangzhou and Incheon in 2010 and improve its position in the 4th placing the 2014 Incheon Asian Games.

On top of achieving the seven gold targets with 13 silvers and 16 bronze medals, bringing a total of 36 medals. Although the overall performance was beyond the previous five gold, 14 silver and 14 bronze medals achieved in Incheon (a total of 33 medals), but Malaysia is still ranked 14th as it was four years ago. Should Azizul Hasni Awang (Men’s keirin) and the men’s hockey team had won the gold medals, Malaysian contingent can equal the record of 9 gold medals achieved in the 2010 Guangzhou Asian Games.

Moreover, the athlete has broken six national records through cycling (team sprint), archery compound (two records) and swimming (three records) in this edition of the Asian Games which was known as the second largest multi-sport event after the Olympic Games.

Nevertheless, Malaysia also won two Olympic Games tickets 2020 through Khairulnizam Afendy and Nur Shazrin Mohamad Latif. The former, won silver in the men’s Laser Standard (The gold medallist from Republic of Korea’s Ha Jee-min had already qualified for the Olympics at this year’s world championships), while the latter, Nur Shazrin Mohamad Latif though obtaining the bronze medal in sailboarding but also the berth to 2020 Tokyo Olympics Games due to both gold and silver medallist of Japan’s Manami Doi and China’s Zhang Dongshuang had already qualified for the 2010 Tokyo Olympics Games much earlier.

Despite cheers of thousands of home fans who flooded Ranau Hall, Jakabaring Sports City, the men’s regu final consists of Syahir Rosdi, Zulkifli Abdul Razak, Norhaffizi Abdul Razak, Farhan Adam and Azlan Alias was able to strengthen its emotions control by defeating the host, Indonesia 2-1 in spite of losing the first set and on the verge of handing the gold medal to Indonesia after thrilling 11-17 in the second game. In the decider, the national squad was seen to be more prepared and able to withstand for the opposition squad to subdue Indonesia 21-11. The gold medal also ends 24-year sepak takraw gold drought in the Asian Games. Their winning moments can be seen in this link (https://www.youtube.com/watch?v=YESWyn7b4Fg)

In contrast, among sports that have targeted for the gold medal were pencak silat, wushu, karate did not hit the target. Moreover, for the first time in the history of participation in the Asian Games that the squad of badminton failed to win any medals. Goh V Shem and Tan Wee Kiong (men’s double), Goh Soon Huat and Shevon Jemie Lai as well as Chan Peng Soon and Goh Liu Ying (Mixed double) are ranked 11, 6 and 9 respectively in their events according to the 23 August ranking released by the Badminton World Federation (BWF) were defeated either in the first round, second or the quarterfinals. It can be said only the youngster’s men’s doubles pair, Ong Yew Sin-Teo Ee Yi manage to defeat world no. 3 Takeshi Kamura-Keigo Sonoda of Japan to reach the quarter-final before was shown exit by world no 9 of Indonesia, Fajar Alfian-Muhammad Rian Ardianto at the Istora Senayan Stadium outshined other senior teamates. Not only did the badminton squad fail miserably in the individual events, and then to add insult to injury, the men’s team failed to reach the quarter-finals at the Asian Games since this event was first contested in 1962. For the records, Malaysia men’s team won the bronze medal in the previous Asian Games in Incheon.

Besides the badminton, Malaysia’s also failed to win any gold medals from the subjective sports like wushu, pencak silat, karate, taekwondo. In 2010 Guangzhou Asian Games, Malaysian had won two golds and one gold in karate and wushu respectively. Four years later in the 17th Asian Games in Incheon, the karate team has improved its gold medals to two. For pencak silat, the national silat squad is reportedly putting three gold targets by sending 20 world-class athletes, Mohd Al Jufferi Jamari and Siti Rahmah Mohamed Nasir to compete in Padepokan Pencak Silat arena in Taman Mini Indonesia. However, the squad only managed to settle four silvers and four bronze medals. For instance, three-time world champion, Mohd Al-Jufferi Jamari was defeated by Putra Komang Harik of Indonesia in the Putra E (65-70kg) class in the final. The claims by the Malaysian pencak silat team that the poor judging and biased towards the host team had contributed to their failure to win any gold medals. These issues are not something new in this subjective sport. Back in 2017 KL Sea Games, the Indonesian team also claimed the similar issues against the host of Malaysia. (https://www.nst.com.my/sports/others/2017/08/272735/kl2017-pesaka-refutes-claims-biased-silat-judging). As a matter of fact, the Malaysian National Silat Federation (Pesaka) should look into measures to ensure the athlete under their charge to perform much better in the competition to avoid the similar issues raised by the opponent team. Not only that, should the favouritism towards to host country existed, then the International Pencak Silat Federation should look into these issues seriously if they wanted to see the pencak silat to become one of the games contested in the Olympics Games in the future.

In addition, Malaysia only managed to produce one gold medal winner in an Olympic event at this Asian Games – through track cyclist Azizulhasni Awang, who won the sprint event. The remaining six gold medalists are from non-Olympic sports. (https://www.thestar.com.my/sport/other-sport/2018/09/03/playing-catch-up-malaysia-fall-behind-sea-rivals-in-olympic-sports/#5FBGK7PDj2mYLLyz.99

All in all, the athletes have struggled to fight for medals irrespective whether gold, silver or bronze are to be praised and rewarded. Undeniably, in this 18th Asian Games, some teams did not reach the level as expected, but we did not have to point the finger at them quickly. The ‘blaming game’ should not happen but they should examine the reasons of their failure. At the same time also, all parties should be held responsible and look for the cause of their failure, from players, coaches and management of the sports associations. Who knows, the upcoming 19th Asian Games in Hangzhou, China, they will rise and improve their performance. For all the medallist, they do not have to sit on their laurels, but doubling the training to improve the game and bring it to the next level of the Olympics.

With that said, see you in 19th Asian Games in Hangzhou, China!

View all posts by oochengkeat

This site uses Akismet to reduce spam. Learn how your comment data is processed.